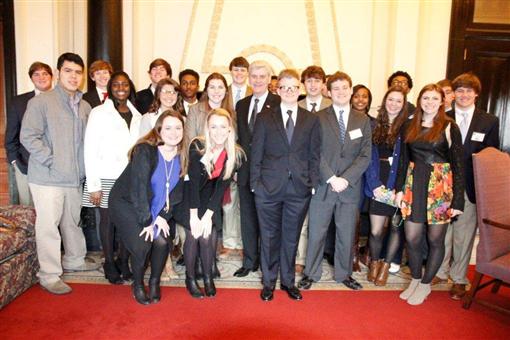 The Class traveled to the Mississippi State Capitol where a tour    was conducted by the Capitol curator.  Governor Phil Bryant    visited with the students in his office. The class also met with Lt. Governor Tate Reeves, Senator Will Longwitz and Chief Justice Bill Waller in the Senate chambers.  Representatives Rita Martinson, Bill Denny and other legislators met with the class in the House of Representatives.

The Old Capitol Inn was the location of the 2015 League & Legislature luncheon attended by the class and 300 plus MCBL&F members, elected officials and guests.  Senator Kenny Wayne Jones led the attendees in the pledge of allegiance to the American flag and Monsignor Michael Flannery offered the invocation.  Guy Hovis, star of Lawrence Welk fame, sang the National Anthem.  State Treasurer Lynn Fitch presented a tribute to Representative Martinson for her 24 years of service in the MS State legislature representing Madison County followed by video testimonials by local officials.

Executive Director, Jan Collins, presented a gift to Representative Martinson on behalf of the MCBL & F, and Madison Alderman-at-large Warren Strain on behalf of the City of Madison.  Governor Phil Bryant introduced keynote speaker, Representative Philip Gunn, Speaker of the MS House of Representatives.  Speaker Gunn informed the guests of current legislation that would impact the business community and the quality of life for Madison County and the state.

At the conclusion of the luncheon, MCBL&F Co-Chairmen Bob Williams and Mark Garriga made a toast celebrating the recent merger of the Madison County Business League and the Madison County Foundation, and wished the MCBL&F a most successful future.  The class returned to the Capitol where they were visited by State Treasurer Lynn Fitch.  The Government Day events conclude the 2014-15 program.  The participants will received special recognition at their junior awards day programs.