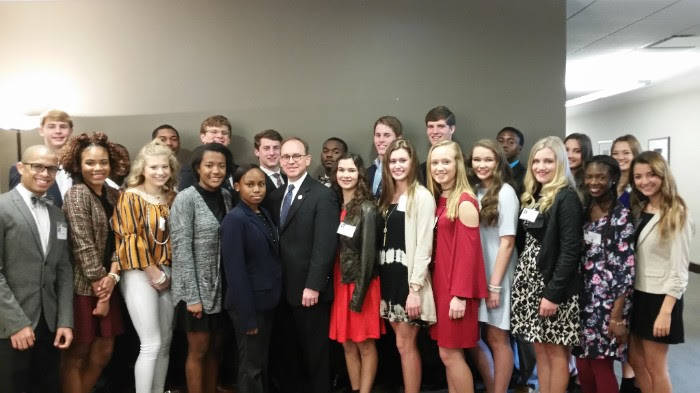 The 2017 Legislative Session has seen action on a number of bills, while others have not moved forward. This update is long, but below is a brief description
of some of the key bills passed by the House of Representatives. I hope you find these of interest. You can also track the bills I have authored at
www.corywilson.ms
. The House continues to work on budgets and Senate bills, with a committee deadline today, February 28, for committees to act on the other chamber’s
general bills. Session ends April 2.

Honored to keynote the Madison County Youth Leadership’s Government Day last week in Ridgeland. It’s always encouraging to be with impressive young leaders. This class is from all over Madison County.

House Bill 1109 would
strengthen state contracting laws, consolidate two boards, and enhance transparency. It tightens
laws related to “sole source” contracts, and provides for “reverse auction” bidding for commodities, saving taxpayer dollars. I was glad to help
craft and handle HB1109’s passage on the House floor. The bill has passed out of committee in the Senate. House Bill 1330 abolishes several inactive boards and commissions. That’s a good start.

House Bill 1425, the
Occupational Board Compliance Act, would protect licensing boards from lawsuits and promote economic liberty. It also sets state
policy to favor less restrictive regulations and requires recommendations to the Legislature each year to reduce regulatory burden. The bill passed
the House and has cleared a Senate committee. Last week, I wrote a piece that discusses HB1425 for the Bigger Pie Forum.
House Bill 974 would exempt certain state agencies from the regulations and procedures of the State Personnel Board. This bill makes sense because it would
allow agencies flexibility to run their departmentsmore cost effectively and efficiently. The bill originally
passed the House by a vote of 62-57.

Earlier in February, the House passed House Bill 866 and House Bill 1224.
The bills are reforms that cut down on standardized test days, and provide more flexibility and autonomy to A and B districts.
I joined as a cosponsor of HB1224, which would free up our best school districts to innovate, and would encourage achievement.
The bill relaxes reporting and bureaucracy for teachers, administrators, and schools.

We continue to look at revamping the outdated education funding formula. The EdBuild recommendationshave
received a lot of coverage. It looks like we will continue to work on the funding formula and may take it up in special session. Many of the EdBuild
recommendations merit serious consideration. But I will strongly oppose any measure that would cut support to Madison County Schools. Here’s a
link to recent press about where the process stands. Roads and bridges.There is broad agreement that funding infrastructure is a core priority of government.
There is not broad agreement yet about how best to do it. Something similar to the EdBuild education funding recommendations may be warranted for
more cost effective ways to build roads and bridges. In the meantime, earlier this month the House voted for House Bill 480,
the internet use tax bill. I voted for the bill because it enforces current tax law evenly, instead of just on Mississippi based business. And,
HB480 would direct money collected to road and bridge maintenance and construction, including 30% for local roads. Currently, all use tax collected
goes into the General Fund, and none goes back to counties or cities. However, the Senate has indicated they will not take up the bill. The House
has also passed several bond bills that would direct resources to roads and bridges. Those bills continue to work through the process.Other bills of note:MSABLE Act. Was very happy to help guide House Bill 162,
the Mississippi ABLE Act, to passage in the full House on February 2. The bill would help disabled Mississippians and their families save, and
achieve a better life experience. We have spent two years working through details with a bipartisan group of legislators, advocates, and some pretty
committed moms. The Senate counterpart, SB2311, has cleared a House committee and will go to our calendar.

Craft breweries will be allowed to sell their products at their breweries for consumption on or off the premises upon the passage
of House Bill 1322.
This bill will help grow our home-brewed businesses, tourism, and Mississippi’s economy. It also brings Mississippi in line with surrounding states
that have passed similar legislation. The bill passed by a vote of 93-23 and is pending in the Senate.

The Rivers McGraw Act passed the House in the form of House Bill 1089.
This bill states that within eight hours of the arrest of someone under the age of 21, law enforcement officers must make reasonable efforts to notify parents before releasing the minor. This bill was requested by the parents of Rivers McGraw, a college student who took his own life after being released from an arrest for substance abuse. The measure passed unanimously.

Back the Badge Act, House Bill 645.
Increases penalties for violent crimes committed against law enforcement officers, first responders and emergency medical technicians. The bill
passed by a vote of 85-31.

House Bill 1226, the
Capitol Complex District. Would establish an area within Jackson in which the state would provide support for infrastructure and
security. Includes the Capitol Complex as well as several neighborhoods and the area around JSU. The bill is pending in the Senate.

Thank you for your interest and feedback on these and any other pending bills. I am working hard to be an effective voice for you at the Capitol. It
is an honor to represent you, and if I can ever be of help, please let me know. Happy Mardi Gras!