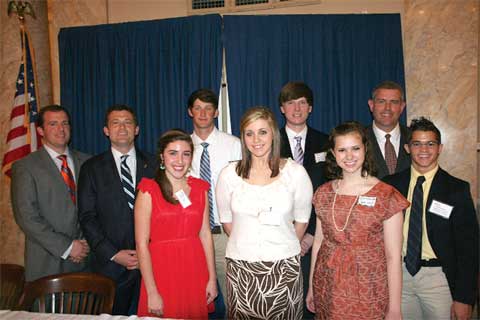 JACKSON – Charter schools and redistricting were the two biggest issues discussed at the Capitol Wednesday during a luncheon meeting between the Madison County legislative delegation and civic leaders.

It was a packed house inside the Judiciary Room of the State Capitol for the Fourth Annual Madison County Business League’s “League and Legislature Luncheon.”

Business leaders, municipal and county officials gathered in front of a panel of Madison County legislators to discuss the current session and how the region is affected.

Speaker of the House Philip Gunn was also in attendance.

“We are busy with our legislative process,” the speaker told the crowd. “We had a dealing last week to get bills out. We stayed up (last week) until probably midnight Tuesday night and one o’clock in the morning Wednesday.

“This week we have the budget process starting,” he continued. “We’ll work that process from now to next Wednesday.”

State Rep. Rita Martinson, a Republican of Madison, believes a lot of the divisiveness associated with the senate’s charter school bill is misunderstanding.

She noted a trip to Washington D.C. seven years ago where she toured successful charter schools.

“They went from D’s to B’s in most cases,” she said, noting it took two years to achieve that goal. “With the charter, (schools) have a certain time limit in which they have to prove they are succeeding. Generally, it’s three years. So after three years if they’re not producing good students or good academic results they are gone. They’re out of there.”

State Sen. Will Longwitz, a Republican of Madison, said he spoke with leaders on the Senate side about the importance of ensuring high-performing districts such as Madison County School District aren’t affected by a bill.

On redistricting, Gunn appointed state Rep. Bill Denny, whose district encompasses part of Madison County, to oversee that on the House side.

“We are working on redistricting,” Gunn said. “We’re in that process now and Bill Denny has been assigned to the task from the House. You can be assured you’re in good hands with him.”

The Speaker didn’t elaborate, pointing to the sensitivity of the issue.

Longwitz spoke from the Senate side, adding that south Madison County has been picked apart over during previous line changes, and this time he hopes it’s different.

“South Madison County in my opinion has not favored all that well,” he explained. “We have…only right now is there a Senate seat in south Madison County that is where the entire district is made up from with a majority from Madison County. The south part of the county has been cut up and split up over the last two redistrictings.

“There are so many votes in the south part of the county,” he continued. “It’s an irresistible pool for those folks who border us.”

He added, “We have a strong united voice in the Senate going forward. I know we’re going to lose some of our areas…but we’re going to get what’s in the best interests of the county at the end of the day.”

Six area high school students were guests of the event and were able to meet and greet with Madison County leaders and well as other members of the Legislature from around the state.