Yesterday, I joined Gerard Gibert on the J.T. show to discuss many important issues facing our nation. In case you missed it, you can listen to our
entire conversation on my Facebook page.
Don’t forget to like and share the video, as it helps in our mission to spread the important facts about what’s going on in the country today.

“Everybody around the world is investing billions and billions of dollars in infrastructure. And we’re going to do it here,” President Biden said
earlier this week when asked about his American Jobs Plan. What President Biden failed to mention is that his huge $2.25 trillion proposal prioritizes
Green New Deal initiatives and includes big tax hikes. He is right that it includes billions of dollars to rebuild roads and bridges, but when
you consider all of the non-transportation, ancillary spending tacked on, infrastructure priorities make up only a small portion of his plan’s
price tag.

In response to criticism on the cost of the proposal, some have tried to broaden the definition of “infrastructure” to include just about everything
under the sun. Senator Kirsten Gillibrand’s recent tweet to this effect has received criticism from both sides of the aisle. 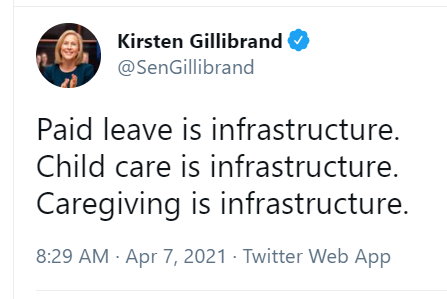 As the narrative is spun around this proposal, it’s important to keep in mind what is actually included in the plan. Roughly 5 percent of the plan
would fund projects that are traditionally considered infrastructure—like roads and bridges. Also included in this proposal would be projects
for electric cars, Green New Deal programs, and giveaways to big labor. The biggest problem with this plan, however, is the tax burden it would
place on American citizens.

To pay for the enormous spending legislation, President Biden wants to raise corporate taxes from 21 percent to 28 percent. The tax hikes are
taxes on corporations, but we know that raising taxes on corporations will impact American workers, too. As a matter of fact, middle class workers
can bear as much as 50 percent of the corporate tax hike burden through lower wages and weaker retirement and pension accounts. This would be detrimental to our recovery efforts following the pandemic.

As I’ve said before, we need targeted legislation that addresses real problems in our infrastructure. If this wasteful bill is pushed through Congress
without serious changes to reduce spending, I will not be able to support it. The American people deserve better than partisan
bills designed to take more money from hard-working Americans.

Academy Day is an opportunity for students to learn more about our nation’s military service academies. Selection to a service academy is an honor
reserved for top students across the country. The honor of attending a Service Academy comes with the obligation and commitment to serve in the
military for a minimum of five years upon graduation. Members of Congress may nominate candidates for appointment to four of the five U.S. Service
Academies: U.S. Military Academy (USMA), West Point, NY; the U.S. Naval Academy (USNA), Annapolis, MD; the U.S. Air Force Academy (USAFA), Colorado
Springs, CO; and the U.S. Merchant Marine Academy (USMMA), Kings Point, NY. The fifth service academy, the U.S. Coast Guard Academy (USCGA), New
London, CT, does not require a congressional nomination for appointment.

If you or someone you know is interested in applying for a Service Academy, please visit our official Academy Day page.

This year’s Academy Day will be hosted via Zoom and requires pre-registration. You can register for Academy Day by clicking here.