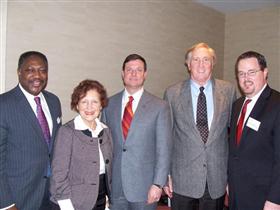 Lucy Weber • lweber@mcherald.com • February 13, 2010
RIDGELAND — The Mississippi Senate, asked to dissolve the agency governing the Ross Barnett Reservoir, has instead focused on zoning.

Sen. Walter Michel, speaking at a Madison County Business League forum recently, said a “whittled down” version of a Senate Bill 2936 dealing with the Pearl River Valley Water Supply District is headed to the House after passing the Senate on Wednesday.

“As the bill stands now, it will give zoning authority to the municipality or county where property sits,” Michel, R-Jackson said. “This is far from the original.”

Sen. Lee Yancey of Brandon filed the bill, prompted by residents who said they don’t like zoning decisions made by the Pearl River Valley board.

Michel was on a panel with other lawmakers who represent Madison County, including Sen. John Horhn, D-Jackson; Rep. Bill Denny, R-Jackson; and Rep. Rita Martinson, R-Madison. They answered questions on a variety of topics pending in the legislative session this year.

With Gov. Haley Barbour making cuts in state agency budgets, “those will be felt somewhere,” Horhn said. “That leaves unfunded mandates to the county.”

Martinson said state aid road money, state funds set aside to pay for projects in counties, has been reduced, including $8,000 cut from projects in Madison County. “We need to be better guardians of money being set aside,” she said.

A Senate bill that would have allowed the proposed Livingston Township at Mississippi 463 and Mississippi 22 to fall under the Mississippi Development Authority’s sales tax incentive program fell victim to timing on Thursday, Michel said.

The bill, which Michel said would have helped create jobs in the commercial-residential development, called for allowing a “historical resort development” to be included in the program. The bill defined the historical development to be the re-establishment of a former town which lost its municipal charter prior to 1945 which will be redeveloped as a travel destination development with a minimum private investment of $50 million. That is the definition of Livingston Township as proposed by developer David Landrum.

Michel said he was told MDA officials and others had questions about the bill as a deadline approached.
To comment on this story, call Lucy Weber at (601) 853-9820.